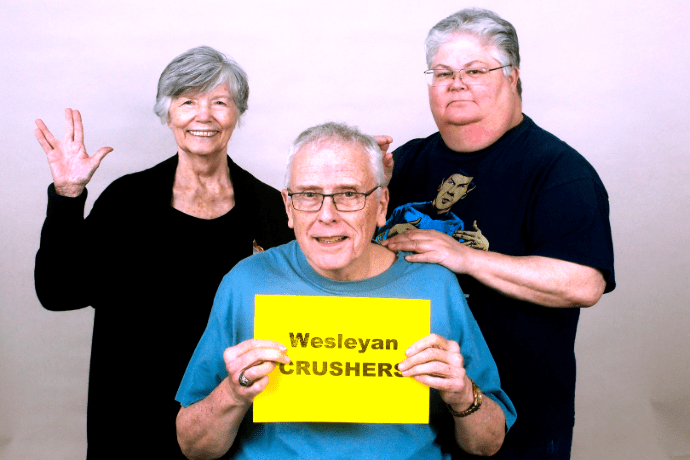 The Texas Wesleyan Crushers have set records and garnered massive online attention for their four consecutive wins at the annual Corporate Spelling Bee, which is organized by the Tarrant County Literacy Coalition.

“This was our sixth year to compete but we didn’t compete last year. We were kinda asked not to,” said biology professor Dr. Mary Anne Clark with a chuckle. “Because we kept winning. We won it four times in a row and I think people were starting to get discouraged. We started to feel bad about winning all the time.”

The spelling bee is a community-wide event in which local businesses and organizations participate to raise money for and awareness of literacy efforts in Tarrant County, according to tarrantliteracycoalition.org. This spring’s event was held April 23 at the Fort Worth Community Arts Center.

Local restaurants, stores, and sporting venues, along with other organizations in the community, serve as sponsors, donors, and partners in literacy with the literacy coalition in order to raise money for the Corporate Spelling Bee.

Dr. Marilyn Pugh, associate professor of psychology, agreed with Clark’s sentiment and said it was fun to be a judge in 2018.

“Much less pressure!” Pugh wrote in an email. “Also, we heard that some teams were no longer entering because they considered us ‘unbeatable.’”

Dr. Bruce McDonald, professor of religion, philosophy and humanities and the Crushers’ third member, had a slightly different take on it.

“Last year, I was willing to go on, but the other two wimped out on me!” McDonald wrote in an email. “To be honest, as one previous winner from Acme Brick had said, when you’re a defending champion, it’s sort of like you have a bull’s-eye in the middle of your back!  So we judged—which was nice, but sort of boring.”

It comes as no surprise that the Crushers won the spelling bee again in 2019, although Clark recalls a completely different set-up of the “spell-a-bration” this time around.

“The teams did not get up and spell against each other,” she said. “Instead, we were sitting at tables and the table as a whole would decide how to spell a word and there were six words read out and so we spelled one word at a time, wrote it down and then sent it up to be checked. Whoever got the most words right won the spelling bee. So it wasn’t a typical spelling bee, it was really different, much more low-key and a lot more fun, frankly.”

Clark inadvertently attracted online attention through a letter to actor Wil Wheaton when she wrote him to share the origin of the name “Wesleyan Crushers,” which was derived from the character name “Wesley Crusher,” a character he played on “Star Trek: The New Generation,” as she and Pugh are both “die-hard Trekkies” as Pugh puts it.

Wheaton shared share a post on his blog about the Crushers’ win at the spelling bee, and the hits skyrocketed from there.

“I actually wrote to Wil Wheaton, who used to play the character and I said, ‘Well, guess what, we picked your name to represent our spelling team,’” Clark said. “And he said, “Ah, well good luck!” So then we won it! So he posted on his blog that the Wesleyan Crushers had won a spelling bee and Texas Wesleyan got so many hits from that blog post! It was really fun and he was very, very nice and very supportive.”

5 trends millennials were up to this summer