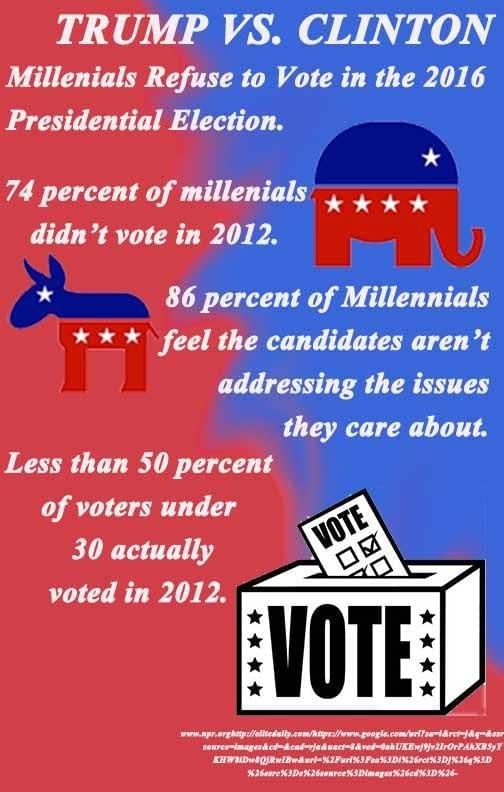 More than half of 20 students who responded to a recent unanimous poll said they are still undecided on whether to vote for Republican nominee Donald Trump or Democratic nominee Hillary Clinton.

“We have a fear of the unknown and that’s what causes many to fear the election and be afraid to vote,” said Jennie Scharnweber, senior political science major. Scharnweber did not participate in the poll, and declined to say who she was voting for.

While news of the election has dominated the media in recent weeks, millennials are still not voting and believe the election is a joke, she said.

“Our current presidential election is really sad,” Scharnweber said. “Our leadership has taken a decline. Great mindful people wrote our Constitution to make our country into what it is today, and now it has become a mockery on all of their hard work.”

Millennials are the second largest generation in the electorate and could easily sway the election, but many aren’t interested in voting and have the lowest turnout at the polls of any generation, according to cnbc.com. Less than 50 percent of voters under 30 actually voted in 2012, which is the lowest percentage recorded since 1996, according to npr.org.

“With this election, individuals in this election are going to be appealing to an important demographic and that’s the millennials,” said James Wetrich, adjunct professor of business. Wetrich did an anonymous poll of students and their attitudes toward the election in one of his classes. “Millennials are our future leaders and by creating this habit of voting they can begin to see that their votes do matter and count.”

Researchers at Harvard University found that many millennials aren’t voting because they generally do not care about politics, according to an article in The Economist. Two-thirds of millennials think politicians go into public service for selfish reasons and that it won’t matter who they vote for their voice won’t be heard.

“What we don’t understand is that people have the constitutional right not to vote as much as they do to vote,” Wetrich said. “I always say you need to follow your gut and do whatever makes you feel comfortable. If you don’t feel comfortable in voting, then don’t. It’s your right.”

According to cnbc.com, 80 percent of the most important events in a person’s life takes place by the time they are 35, and for many millennials, this election is one of them.

“Voting at this point is twice as important in this election than any other,” said Student Government Association Treasurer William Wick, a senior criminal justice and psychology major.

Replacing Supreme Court Justice Antonin Scalia, who died in February, could be greatly affected by who wins the presidency. This is one reason why the importance of voting for Supreme Court justices has been stressed in the current presidential campaign, according to cnbc.com.

“With this election, despite what you may think about the presidential candidates whoever those candidates put into positions for Supreme Court members are going to hold that job long after this election is over,” Wick said.

Several Republican senators, including Majority Leader Mitch McConnell, R-KY, believe voters should not have the chance to voice a strong opinion on the selection of the next Supreme Court justice, according to ballotpedia.org.

“Even if you don’t want to vote for a certain candidate, you still get the chance to vote for who is creating and choosing bills to be made,” Wick said.

Young adults can also show who they are supporting by what products they buy, Wick said.

“Another way you can vote is through your dollars and cents,” Wick said. “Whatever you go and buy from a company or a corporation, you’re supporting their business practices and your dollars are affecting their bottom line. The products you buy and the services you use are a way to show who you are supporting socially and economically.”

It’s not that millennials are uninformed about the election, Wetrich said. It’s that they are so appalled by politics or are embarrassed to voice their opinion.

“I don’t remember a single presidential election where we didn’t see tons of bumper stickers,” said Wetrich. “Almost every election we have seen so many bumper stickers, but this time I’ve probably seen only four stickers. And I believe the reason for that is so many people are embarrassed to show who they are interested in.”

Some people believe the only reason that millennials aren’t voting is because they want some type of incentive for voting, and handing out freebies would entice them. For example, Cosmopolitan magazine is offering student-run college groups  “party buses” full of snacks, freebies and males models for raising the most voter turnout at their university, according to economist.com. Also, President Barack Obama has recently launched a social-media campaign to interest young adults.

But many students don’t care about freebies, Wick said. They want the system of voting to be easier and, perhaps, the day the election is held to change.

“I think the most important thing is to make the voting process a lot easier,” Wick said. “I understand there’s a value for having it on a specific date but if it’s not always working out then maybe it’s time for us to change things.”

In the long run, the candidates must find a way to woo young voters by giving them something to believe in, said Dr. Michelle Payne, associate professor of political science.

“This is a very historical election,” said Payne. “We have one candidate with no previous political experience and that would be first for our country and we could have our first woman president. This is the most interesting election we’ve ever had.”