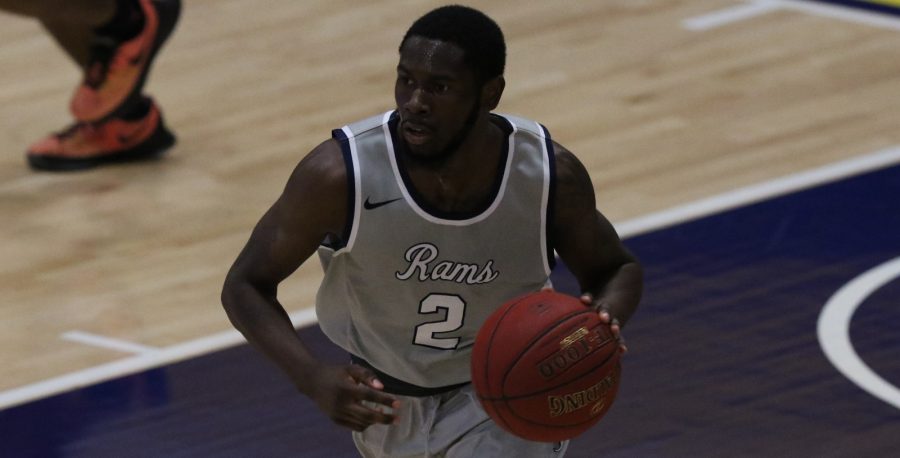 Dion Rogers, shown here in a game in January, is now a coach. Photo by Little Jo.

Rogers, 22 and a liberal studies major, leads the team in scoring with an average of 19 points per game; he also averages five rebounds and 4.1 assists, according to ramsports.net.

But, he says, being the team’s leading scorer is nothing new to him.

“It’s not that big of a deal to me,” Rogers said. “Everywhere I’ve been, I’ve been sort of the top scorer at some point. Maybe not my freshman year, but by my second year, I’m usually the top scorer wherever I go.”

After high school, Rogers first attended Essex County College not far from his home in New Jersey; after that he transferred to Delaware State University for a semester, and then to Wesleyan. This is his third semester here.

“I had already made my career high this year, so I didn’t know if I was going to get higher than that,” Rogers said of the OCU game. “But I did, I was kind of happy I did it. I haven’t really been in a slump this year. I’m glad I’m doing well.”

“Points are a major thing, but it keeps balance too,” Shingleton said. “Because not only do people have to guard him, but when they do put emphasis on him, it makes other people get open as well. He’s a really good on-the-ball defender and he’s a sneaky rebounder.”

“When you speak chemistry, he’s a major part of the formula,” Shingleton said. “He’s very unselfish, humble, and he’s just a team guy.”

Rogers said he wasn’t really challenged on the court until he started playing college ball. But that’s not to say his time playing in high school was wasted.

“My experience at North Brunswick (Township High School) as a player has been comfortable,” said Rogers. “Coach already knew who I was when I was in middle school, he was coming to my games. When I got to high school, as a freshman I started varsity and each year we got better and better, and we accomplished a lot of goals in my senior year. So it helped me.”

North Brunswick head coach Edward Breheney said Rogers was a “complete joy” to have on the team.

“We knew about Dion from junior high on and he made an immediate impact on our program,” Breheney said. “He’s absolutely one of the greatest persons we had come through our school.”

Breheney said Rogers improved a great deal in his four years as a starter at North Brunswick.

“He always had the physical skills,” Breheney said, “but by the time he left us he could figure out how to get his own points and how to get off his teammate’s [points] as well.”

Like Shingleton, Breheney noted that Rogers’ personality is a major factor in his success.

“He’s very comfortable with his teammates – very unselfish player,” Breheney said. “I would characterize Dion as a humble person and a very intense competitor at the same time. He took coaching very well.”

At the same time, Rogers admits that he does have his flaws.

Rogers said he that he plans to continue playing after graduation, or going into criminal justice.

“I haven’t given it that much thought,” he said about his post-graduation plans. “Thought about being a police officer, maybe? I’m kind of betting on this basketball thing.”

“If I get a NBA workout or something like that,” he said. “You know, that’ll be good for me. But yeah, overseas.”

For now, Shingleton needs Rogers to keep up his role as a leader.

“I really want him to grasp this next six to eight weeks, finish the season strong, have the best second semester a senior could have,” Shingleton said. “That’s where I see his future, short term.”