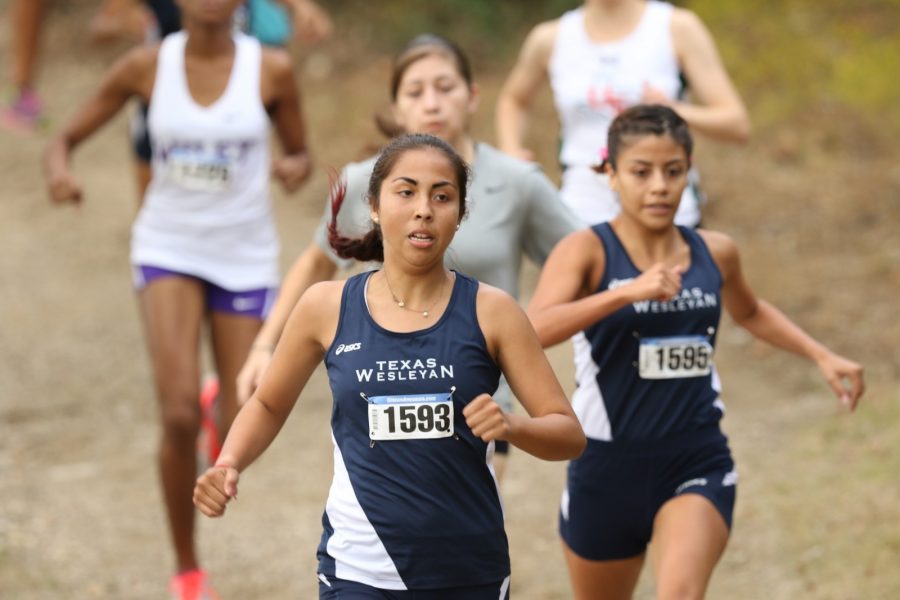 With Texas Wesleyan’s indoor track season finished, the Lady Rams have turned their attention to the outdoor season.

Freshman distance runner Abby Chaidez said running during the indoor season prepares the team to compete in the outdoor season, which began February 25 and ends May 5. The NAIA National Championship meet will be May 25-27 in Gulf Shores, Ala.

“It really helps you for the outdoor meets,” said Chaidez, an education major. “You get to compete more and you’ll have more competition before the outdoor season. An indoor track is 200m and an outdoor track is 400m. Usually the times in an indoor meet are slower because there is not a lot of oxygen. The atmosphere is totally different but the competition is the same.”

The goal is for the whole team to experience running at nationals, Chaidez said. “We’re just trying to get everyone qualified in at least one event. We want to all goes as a team. We don’t want it to be like cross country, we only had two girls go to nationals.”

Also during the indoor season, three Lady Rams qualified for nationals, according to ramsports.net. Melissa Gonzalez set a new school record of 1:28:40 at the SAGU half marathon on Feb. 4. Abby Chaidez finished fourth with a time of 1:31:02, one second faster teammate Alexis Bustos.

Bustos, a freshman, said competing in her first meet of the outdoor season was a great experience. On Feb. 25 at the Trinity Open in San Antonio, Bustos finished second in the 10000m run with a time of 43:02.00 while Chaidez finished third with a time of 43:45.00.

“It felt great to know that we actually completed the race,” said Bustos, a criminal justice major. “Six miles on a track is hard physically and mentally, you’re just running in circles. Some girls actually dropped out of the race.

“Coach (Natnael Amare) just told us to go out and have fun. It was our first race, so he was not too strict about things. He wanted us to get our first college outdoor meet out the way. “

Transfer and distance runner Kaitlyn Mendoza missed the indoor season due to stress fractures. She said she is hoping to adjust during the outdoor season.

“You have one coach that did things one way, and you’re used to doing things their way,” said Mendoza, a history major. “Coach Nat does things way different from my previous coach; the workouts are way harder, but coach Nat is way more approachable.

The Lady Rams continue their outdoor season this week at the Victor Lopez Classic in Houston on Friday and Saturday. Also on Saturday, the team competes in Arlington at the Bobby Lane Invitational. For more information go to ramsports.net.