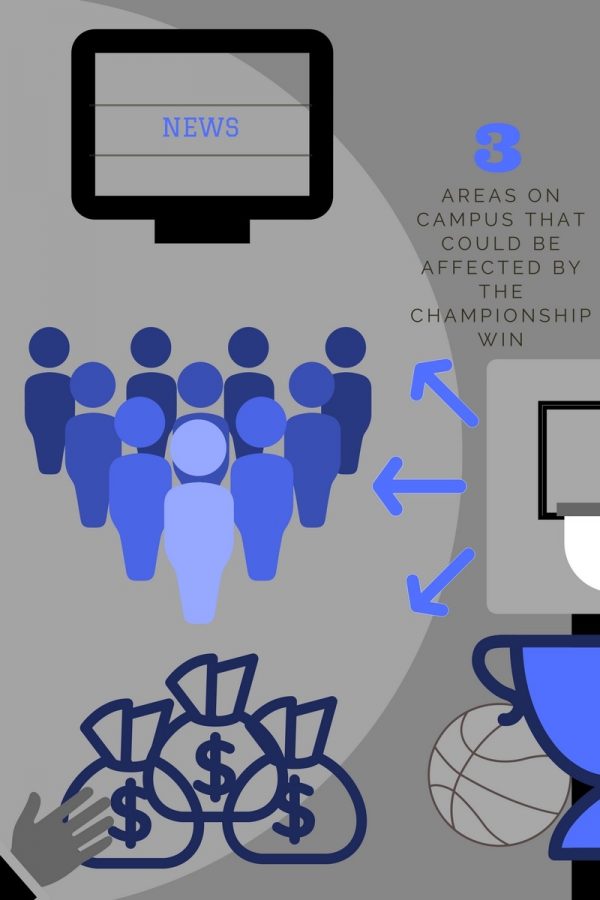 Senior criminal justice major Katie Matthews made the joke that the cookies she baked for the basketball team was the key to their victory.

“I’m part of Ram Squad so I thought it would be nice for Ram Squad to do something for them,” Matthews said. “I’m really big into baking anyway and everyone says my cooking is really good so I just decided combine the two together.”

Matthews said assistant men’s basketball coach Matt Garnett was thankful when she gave him the cookies. He even asked her to bake again for the team next year.

Garnett’s request wasn’t the only effect the men’s championship victory had on the campus. It also affected Texas Wesleyan’s Office of Marketing & Communications.

“First of all, we knew that we wanted to have a celebration for the guys on campus, so we worked with our different on campus partners in Student Life, the Provost Office, Athletics, as well as many other departments to organize that celebration,” said Darren White, associate vice president of marketing and communications. “We also reached out to our partners because we knew that we wanted to commemorate the national championship with T-shirts since we knew that people were already asking before they won the national championship.”

The celebration took place on March 28 in the Sid Richardson Center during lunch time. Students and faculty received free lunch and a T-shirt while congratulating the basketball team on their win.

White said marketing and communications also worked on getting the word out to the community.

“In addition to those things, we also wanted to get the community to know the great things that our basketball team was doing,” White said. “We obviously got a lot of great coverage from area news media, but we also had run a short, limited run of billboards and a TV commercial.”

As for future plans, White said he isn’t completely sure but marketing is likely to refocus on basketball when next season rolls around.

“We don’t have any plans for videos or billboards right now specifically for them. However, we are very excited about basketball,” White said. “Once you have a national championship team, the question is, can the team win (back to back)? We would love to build the energy and enthusiasm around our season next year so maybe we’ll look at some strategies for that.”

Marketing and communications aren’t the only ones with plans to promote the basketball team’s victory. Djuana Young, associate vice president for enrollment, said student enrollment will also be mentioning this to incoming students this summer.

“Everyone wants to be associated with the winner, so being able to talk about what the team has done and the excitement of that is one more thing that a student can point to and say, ‘I’m going to a school that has X,’” Young said. “It just brings excitement to the campus.”

Young said she hasn’t seen any noticeable spikes in enrollment yet, but she believes there will be some eventually.

“I think it (the victory) helps when a student is making a decision on whether or not they want to attend an institution to have this type of publicity and excitement on a campus,” Young said. “I can’t tell you that everything (that causes enrollment spikes) will directly relate to the team winning a national championship, but as students are making their minds up that one more piece will possibly help them with the decision.”

Matthews is hopeful that the basketball team’s victory will draw in lots of new students.

Matthews is graduating this fall, and she said she would like to see this victory revamp the crowds at the basketball games next season.

“I was there for every game cheering them on,” Matthews said. “I’m just hoping that Ram Squad will continue to grow even after I leave. We won our national championships and some of the reason is because Ram Squad was always there cheering the guys on and hyping up the crowd and players.”

Matthews said this victory sets the team’s bar for next season.