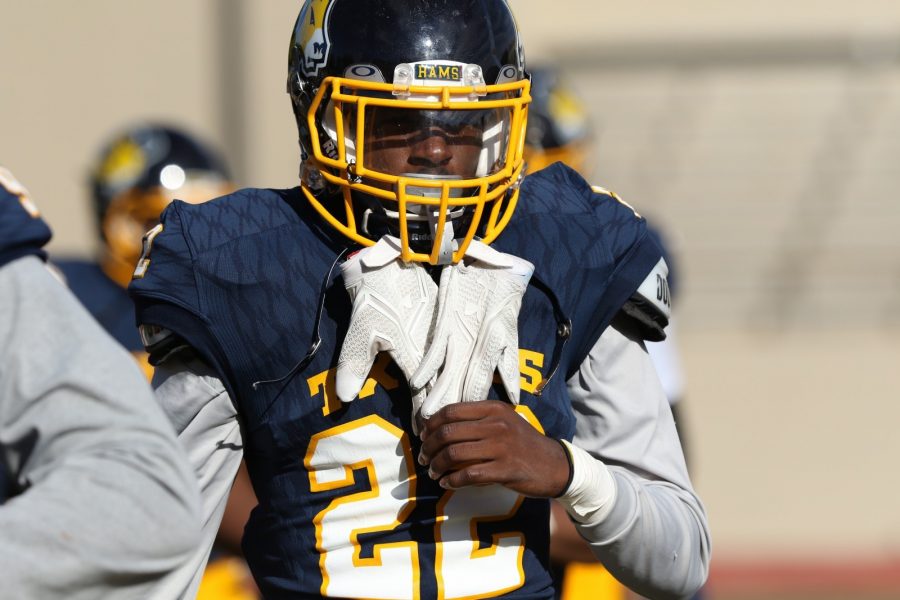 Parrish Dixon-Smith was named Central States Football League Defensive Player of the Week because of his performance against Wayland Baptist University. Photo by Little Joe

The Rams are gearing up to play No. 23 Arizona Christian University in the last home game of the season.

The Rams have a lot to work on after losing last week’s game to Wayland Baptist University, head coach Joe Prud’homme said.

“In every phase, we have to make improvement, it was our sloppiest game overall since McPherson,” Prud’homme said.

The Rams took their first lead of the season two weeks ago in the game against Lyon College, which excited the team, Prud’homme said.

“We were all pretty disappointed in our performance last week,” he said, “especially after the strong effort at Lyon.”

The Rams need to improve in these areas if they want to perform better against Arizona Christian University.

Continue to work as a team.

“We’ve got a better understanding of the playbook,” quarterback Erik Richards said, “and our assignments opposed to that of the first game, and we also have nine games under us so the guys have some experience to build on and relate to.”

The team has better chemistry now but the players have to continue to trust each other, cornerback Jordan Sutherlin said.

“We’ve become more comfortable with each other,” Sutherlin said. “We know each other’s strengths and weaknesses so we know how to help each other.”

Keep the Firestorm from scoring early.

Richards said it will be important to get momentum early on Saturday and keep it. It can really hurt a team mentally if their opponent scores extremely early in the game.

“Wayland scoring hurt us initially because they got up on us so quick,” Richards said, “so I think we got the wind knocked out of us a little bit.”

It’s hard to play without being discouraged when the team is behind only 30 seconds into the game, Sutherlin said.

“The thing I believe hurt the most was how fast Wayland scored to begin the game so we were playing from behind the whole way,” he said.

The offense needs to capitalize on every down, but especially third downs, Richards said.

“As an offense, we could’ve executed third downs better,” he said. “We had a few drives fall short because of missed third down opportunities.”

If the offense can fix “[their] passing game and finish drives and avoid the three and outs,” the team will be get better, Prud’homme said.

“The energy was high in warmups because Wayland was more or less taunting us in pre-game,” Richards said. “So, the coaches did a good job of firing us up.”

The energy the team had in warmups quickly sputtered out after Wayland scored so early on. The team needs to prevent this and not allow it to affect the rest of the game, Sutherlin said.

“It kind of killed the momentum and made us lack energy,” he said.

The defense has been trying to get better at stopping big plays all season, Sutherlin said.

“We need to stop the big plays,” he said. “That’s been the struggle this whole year. We thought we had it last week. But those big plays during the game killed what we had going.”

Last week’s defense was led by Parrish Dixon-Smith, who had two interceptions, including a pick-six for a 36-yard touchdown early in the second quarter, according to ramsports.net. His performance gave him the title of Central States Football League Defensive Player of the Week.

The Texas Wesleyan Rams will play the Arizona Christian University Firestorm at 2 p.m. Saturday at Farrington Field. For more information go to ramsports.net. The game will be shown on ramsports.net; go to the team’s schedule and then click Live Video.