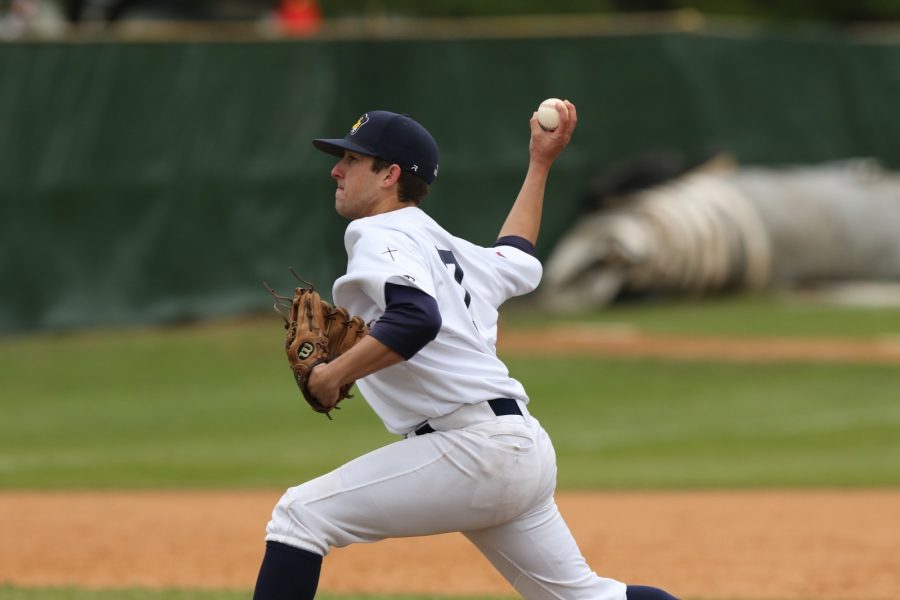 Sugg pitches against Oklahoma Panhandle State University at Sycamore Park on April 7. The Rams won 12-2; he struck out five. Photo by Little Joe.

Sugg, a senior right-hander, has a perfect 8-0 record this season. That spotless record puts him at No. 8 in the country for Division I, according to dakstats.net; his ERA is 1.56.

“I gain confidence in that role, or any role, really,” said Sugg, an exercise major, when asked how he grew as a pitcher at Texas Wesleyan. “Your emotions play a lot into it. Even if [the game’s] not going well, you really just have to fake it. No matter what, I’m causing the situation, so if I’m showing confidence, my team will be confident.”

Sugg came to Wesleyan last year, transferring from Cedar Valley College in Lancaster. Halfway through the 2017 season, he was assigned to be the team’s closing relief pitcher. Sugg said the DI competition he faced at Wesleyan forced him to grow, ultimately giving him the starting position he has now.

“I would say I matured just by higher level of play,” he said. “Being in that role of closing games half-way through the season last year, [I knew,] ‘OK, this is my job, this is what I have to do.’ If you’re not strong mentally, it’s going to knock you down.”

While Sugg carries a nice national ranking and impressive record now, this was not always the case. Coming out of high school and heading off to Cedar Valley, he needed to have some work done. And Cedar Valley’s head coach, Robert Dally, was willing to put his back into it.

“Sports wise, I made a transition,” Sugg said. “[Freshman year] I threw over the top there a little while, and over the top didn’t work well with me. I changed arm slots to over-the-side and finished my sophomore year with an ERA of 4.15. Still not the greatest, but it was an improvement.”

As recorded on cvsuns.com, Sugg didn’t have the best record, finishing the 2016 season 1-2. However, he did manage to get 17 strikeouts, as well as start three games. Sugg said his time at Cedar Valley allowed him to get more playing time and really work himself out as a player.

He especially praised Dally for being a dedicated mentor both on and off the field.

“He’s one of the type of people that’s like, ‘What can I do for you?’ instead of ‘What can you do for me?’” Sugg said. “And that’s the type of people you want to play for. Coming from a single-parent home, college, even at the JuCo level, was hard to pay for. [Dally] helped me financially by allowing me to be a work study for him. He also did well to push the team academically. He was all about grades. He told us, ‘If you have more than one B, you’re out of here.’”

Having polished his technique at Cedar Valley, when it came time to change schools again, Sugg was pointed by Dally to Wesleyan. In the recruiting process, Wesleyan coach Bobby Garza saw potential.

“When I saw him throw against some hitters in a game situation, I knew that there was something that was causing the hitters to be off balance,” said Garza, who is now the interim head coach in place of Mike Jeffcoat. “Just seeing him go about his business and how he handled himself through the recruiting process really intrigued us. I knew that we were gonna have something potentially special if we got him, and fortunately, we did get him.”

Sugg went 5-1 with a 2.36 ERA and 40 strikeouts for the Rams in 2017. Garza said the coaching staff focused on his mental strength.

“We wanted to create a mindset that could help him understand who he truly is and how his ball moves so he’s successful for not just a few innings but over a long period of time,” he said. “[We wanted him to know] what he’s good at, bad at, [so we can make him] a game plan per team [and] environment so he’ll have a successful plan of attack.”

As a senior, Sugg is preparing for the next phase of his life. He wants to coach at the collegiate level, trading in his baseball uniform for a polo shirt and slacks, but keeping the cap.

“With it being my last two years of eligibility, I would say, either you put up or shut up,” Sugg said.
“Do well and excel or feel sorry about yourself and why you’re not playing.

“For me, the number one thing that’s made me the player I am now would be the coaches and my teammates. Both at Cedar Valley and Wesleyan, Dally, Garza, and Jeffcoat believed in me, and their confidence have made me just jump.”

Senior pitcher Parker Robinson, a good friend of Sugg, said that as a starting pitcher, Sugg’s impact on the up-and-coming players is visible.

“As a senior, with all the stuff he’s been able to accomplish on the field, I feel like he’s developed a leadership role,” Robinson said. “Just carrying the load of being a pitcher and taking it to where we wanna go at, it makes all the pitchers on the staff look up and say, ‘Wow, if Brad can do it, we all can do it. We just gotta work hard and grind out for each other.’”

Garza is as confident about the decisions Sugg will make about his future as he is about the ones he makes on the mound.

“I think he’ll be successful in whatever path he chooses,” Garza said. “We expect him to finish his career here on a high note; he’s proven he’s one of the best pitchers in the country and in our stacked conference. Whatever he decides to do after baseball, after school, he’s gonna be successful.”