Rams ready to return to the field 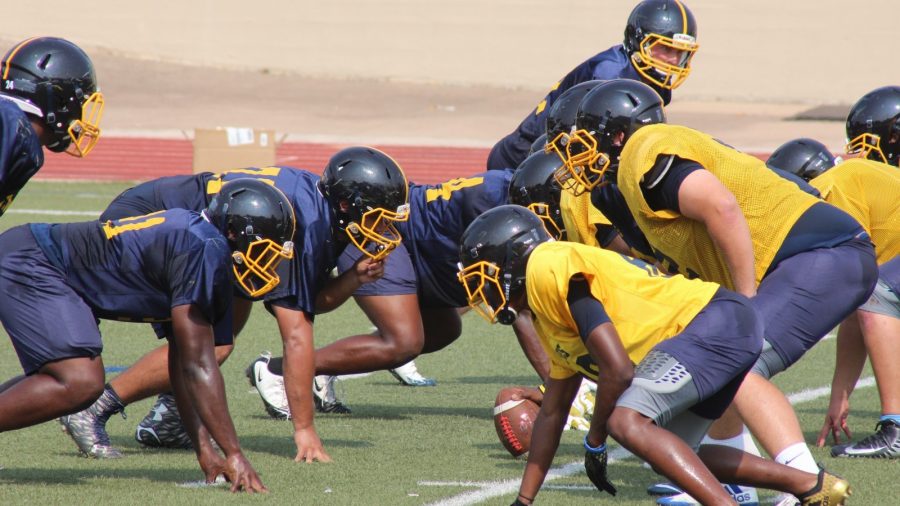 As the beginning of the new football season approaches, fans, players, and coaches feel optimistic about what the second season has in store.

Head coach Joe Prud’homme is excited for seeing what the team is going to do this season.  He said that the Rams have really upped their game this year and are looking forward to facing their opponents.

“I think we’re gonna be a lot more explosive, a lot more fun to watch,” Prud’homme said.  “I’m looking forward to seeing all the work we did in the off-season manifest.  Our kids had a great attitude about what we’re doing, and they really bought into everything.  The improvement we’ve made is dramatic.”

The season’s first game is 7 p.m. Saturday at Farrington Field against the Kansas Wesleyan University Coyotes. The Rams, 1-10 in 2017, were ranked ninth in a preseason Sooner Athletic Conference coaches’ poll, according to ramsports.net.

While improvements must always be made, Prud’homme said that he thinks the season will be an exciting one for players and fans.

“I think we’ve matured as a program, and I think that will be a lot more fun to watch,” Prud’homme said.  “We want to be something everyone is proud of and want to come see and support.  This is everybody’s team; not just our team, everybody’s team.”

Special team coordinator David Murphy said the team is taking a new approach this year with having some of the seasoned team members mentor the newer and younger players.

“I’m looking forward to the season,” Murphy said.  “We’ve got some new players, new coaches, and it’s something to look forward to.  There’s a higher intensity during practice and a lot better competition across the board.  It’s a competitive but non-combative environment, so it’s the best of both worlds.  We’re excited for every single one of our games this year.”

Assistant football coach Michael Rosas said that he thinks fans should be excited for the game Saturday, in addition to the rest of the games this season.

“It’s a brand new season,” Rosas said.  “A new opportunity to get after it, and to get out there and show what we’re made of.”

Sports information director Ryan Keating wrote in an e-mail that he was excited for some of the events this first game had to offer fans.

“The Ram Zone presented by 92.1 Hank FM will be back to rally our fans before kick-off,” Keating wrote, “the Goldline dancers and TXWES Cheer squad will keep the excitement going at halftime and throughout the game, the TXWES pep band will be full force to keep everyone in a rowdy mood, and hopefully our student organizations will come out and support their fellow Rams and do their part to show everyone why Game Day at Farrington Field is one of the best experiences in the NAIA.”

Keating wrote that he is feeling excited for a potentially big season, and he is particularly impressed by several new players that have been added to the roster.

“What I’ll be looking closely at this season is special teams and the receiving core,” Keating wrote.  “Special teams is an area that often gets overlooked from a fan standpoint, but a special teams unit can drastically change the momentum of the game in just a few seconds. Close games often come down to a field goal, and a comeback can spark from a kick or punt return for touchdown.

“Those events are so electric and it gives fans a reason to get on their feet. If the receiving core can consistently move the chains, I think it’ll make defenses have to spread to cover those guys, which in turn will give our running backs bigger lanes at the second level.”

Play-by-play announcer Jimmy Christopher wrote in an email that he is looking forward to the team getting a number of wins to build a contagious, winning attitude.

“(Fans should be excited about) seeing the new recruits,” Christopher wrote, “including quarterback Donovan Isom and running back Desmond Nisby and the upgrades on both the offense and already solid defense.”

The Rams’ next home game is against Texas College at 7 p.m. on September 15 at Farrington Field. Tickets for all home games are available at https://gofan.co/app/school/TX68059.