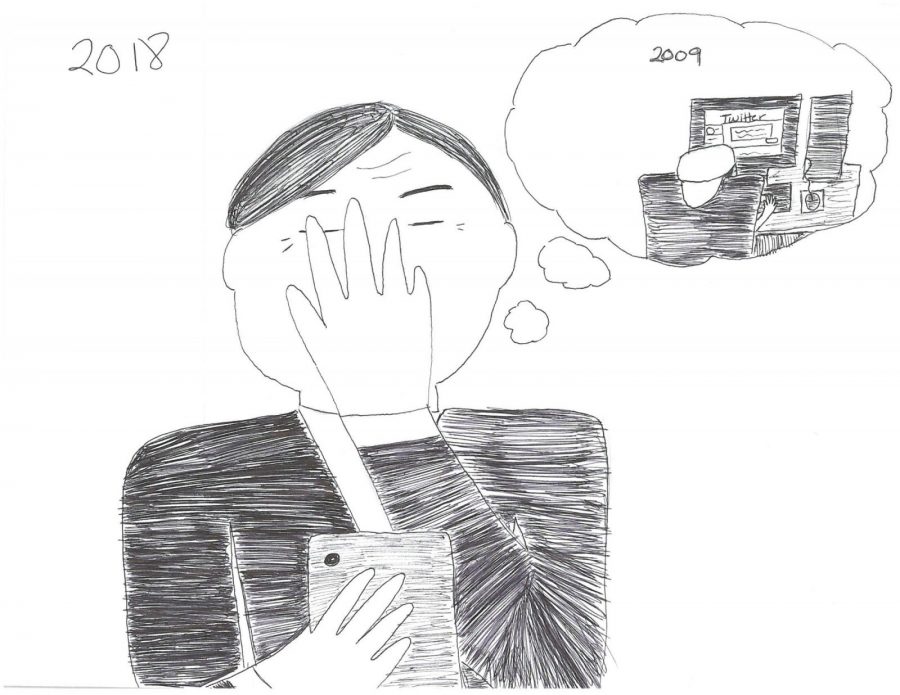 People shouldn’t be losing their jobs over old social media posts. People grow in chaacter through experience, and employers should check social media before they hire people. Cartoon by Hannah Onder

What if one written word could ruin your whole career? In 2018, it’s become a common trend to see people fired for old tweets made five, 10, and recently 35 years ago.

According to the Indianapolis Star, in late August, retired Indy 500 and Formula One driver Derek Daly was fired from his job as a longtime racing analyst for WISH-TV. This occurred after an interview surfaced of him using the n-word in reference to himself as a scapegoat more than three decades ago.

Daly, who at the time had recently come over from Ireland, released this statement on Twitter following his firing: “I had no idea in this country that phrase had a horribly different meaning and connotation, as it was commonplace in Ireland. After moving to the United States, I learned what a derogatory term it was. When I was first informed of this, I was mortified at the offense I might have caused people. I have therefore never used the word since.”

No, it was not. Daly claims he was a foreigner that, at the time, didn’t know any better and it doesn’t seem like any other scenarios with him using the word have surfaced. From that, we can believe his statement that at the time he just didn’t know America’s connotations for the word and has since learned from it.

Besides, do you want someone judging your character based on comments you made three decades ago?

No, you don’t and neither does anyone else. This is because we know people can change. Individuals can learn and grow over the years to where when they look back in hindsight at their old opinions, they’ll think about how stupid they were. Heck, it doesn’t even take years for people to change their opinion; just take that selfie you posted last week that you now wonder why you posted it.

Another example would be James Gunn, the writer/director of the Guardians of the Galaxy movies. According to People, Walt Disney Studios fired Gunn in late July for decade-old tweets that involved jokes about pedophilia and rape.

“Many people who have followed my career know when I started, I viewed myself as a provocateur, making movies and telling jokes that were outrageous or taboo,” Gunn wrote on Twitter. “As I have discussed publicly many times, as I’ve developed as a person, so has my work and my humor. In the past I have apologized for humor of mine that hurt people. I felt truly sorry and meant every word of my apologies.”

Gunn said he doesn’t blame his past self, but he recognizes he is human and humans make mistakes and grow from them. During his career, according to snopes.com, the Guardians of the Galaxy franchise has earned more than $1.5 billion in global box office.

Was it worth it to fire a talented filmmaker in the middle of scripting a new movie over tweets made a decade ago?

No. It’s going to take some effort to find a decent replacement writer, and if Disney had a problem with Gunn’s old tweets they shouldn’t have hired him in the first place.

Some people are smart and cautious enough to go through their social media before applying to jobs. However, it can be hard to keep track of every stupid thing your younger self thought was cool. Also, society’s opinions on different topics can change, and something that was once considered appropriate can be considered inappropriate now.

If employers have issues with what their employees have posted on social media, they shouldn’t have hired them in the first place. It is possible for employers to check people’s public social media pages and it isn’t that time consuming for the average person.

Texas Wesleyan recently suspended offensive coordinator Kyle Cox because of tweets he made four to five years ago as a college student that were called racist and homophobic by people on Twitter.

This situation should never have occurred. If Texas Wesleyan has a problem with these old tweets, Cox shouldn’t have been hired in the first place. It doesn’t take an unreasonable amount of time to dig through someone’s public social media accounts. It was because someone took the time to dig through Cox’s social media when the university didn’t that these issues erupted.

Therefore, if employers are going to make a big deal out of people digging up their employees’ old tweets or comments they should take a more active role in looking into their job candidates’ social media.

The same goes for politics. When we elect people, we should do our research and go digging into their social media before they’re elected. Once someone is elected they should be judged on the character they display and the actions they take.

Should there be a cut-off date when old tweets and comments shouldn’t matter?

Yes. People say stupid things when they’re young that don’t reflect their adult opinion. When people are young, they can be exposed to negative environments where things are said that may be considered inappropriate to the general public, and they just don’t know any better. When they grow and experience different things and meet more people, they can learn to understand that the n-word, for example, is not acceptable.

Therefore, people should not be fired for old tweets and comments. If they aren’t using inappropriate language or opinions on social media now, they shouldn’t be penalized for what they have grown past.