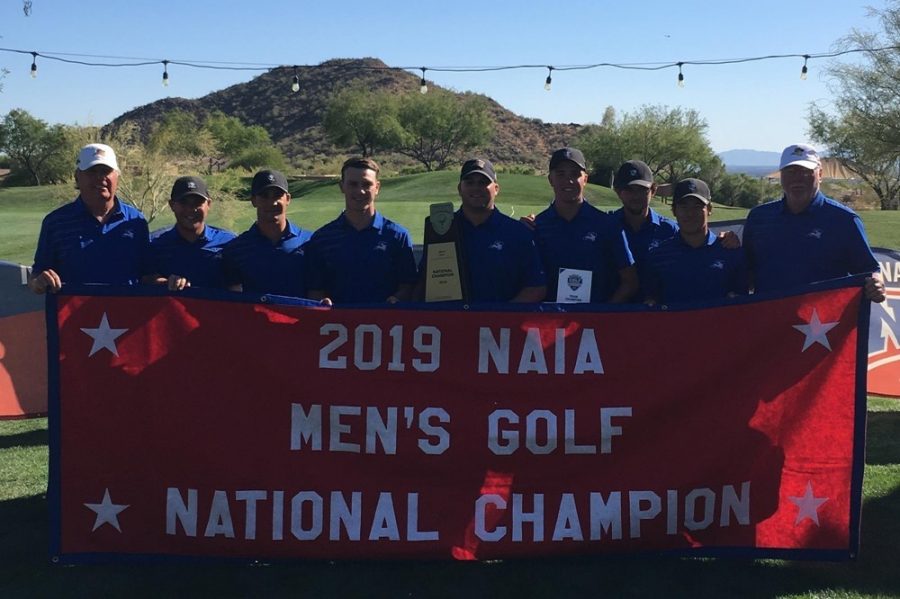 Due to his wrist injury, Rowan Lester hadn’t been able to participate in any of the men’s golf team’s spring season tournaments.

But he was able to return just in time to help the team win a national championship for the first time in 20 years.

The team won the 2019 NAIA National Championship on May 24 in Arizona; the Rams triumphed over more than a dozen teams, leading the entire four days of the tournament. Lester tied for 14th in the tournament and finished third among his teammates, according to ramsports.net.

“It’s great to come back and lead the team to a nationals win,” Lester wrote in an email. “To be honest I’m just happy to be back playing golf and to a good level. Feels great to win and be the ones to win for the first time in 20 years, we know how much it means to coach and to do it for not only us but him too is great.”

Head coach Bobby Cornett, who was named the 2019 NAIA Coach of the Year this week, led the men’s team to three national championship when he was head coach between 1985 and 1999, according to ramsports.net; he returned to his position as head coach in 2009.

He said he felt a sudden relief once the team won. The teams he coached after 1999 had chances to win the national title, “but Jupiter didn’t align with Mars and it aligned this time and it was a relief.”

“The guys on our team right now, they get along together and they’re enjoyable to be around, they’re fun guys and I was really happy for them and their achievement,” he said.

Cornett said the team’s preparation for nationals was playing a number of tournaments. This semester was “strange” due to Lester’s wrist injury.

“He’s very sophisticated and solid tournament player,” he said. “He’s got a wealth of tournament behind him. He doesn’t get worked up and out of sorts about tournaments. He’s really good about that because of all his experience so I wasn’t worried about him.”

The team had been chasing the big win ever since their sixth national win back in 1999, according to ramsports.net. They came close every year, placing fourth in 2016 and third in 2017 and 2018.

Cornett said the national title will not only will help continue the growth of this program, but also potential upcoming tournaments, potential program support from equipment manufacturers and future recruitment.

He said he wasn’t aware the team had won the title until the last player finished his last hole.

“The Coastal Georgia coach congratulated me on the 18th tee box but I said, ‘Well, we ain’t got this last par five and it’s really hard to play,’ very difficult driving hole and I don’t look at the scores,” he said. “So I didn’t really know until we got through. I had an idea we were still in the lead but didn’t know until it was over.”

Texas Wesleyan Athletic Director Ricky Dotson wrote that he is very proud of the program.

“Our men’s golf team has established a phenomenal record over a long period of time and the 2019 National Championship just adds to the legacy of the program,” he wrote. “I can’t begin to tell you how proud I am of these guys. Bobby and Shaun have lead a special group of young men to the top of the mountain in NAIA golf and The University couldn’t be more excited. We now own 7 National Championships in golf; the second most all-time in the NAIA – I think that makes us one of the elite programs in collegiate golf.”