Kevin Ren is reaching for success in a new territory 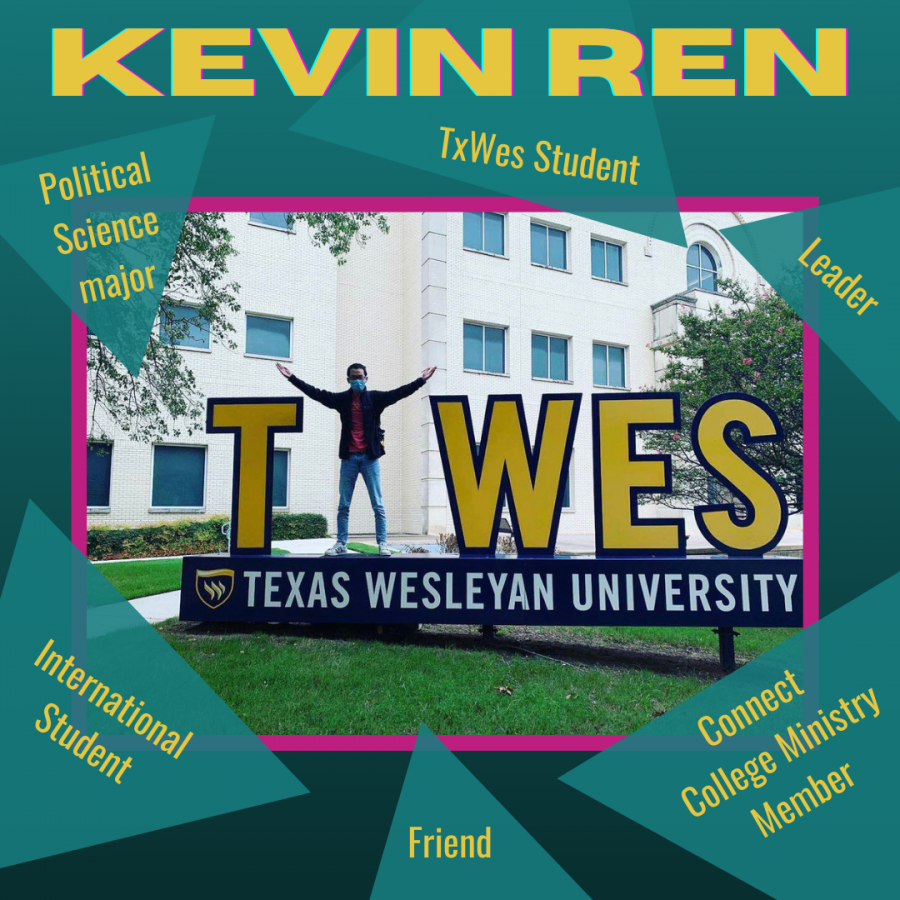 Kehuan “Kevin” Ren is no ordinary student. He came to America in 2012 for a vacation with his family for two months. Immediately, he fell in love with the possibilities that were available to him. While Ren never intended to stay in the United States, he found freedoms that he was not used to back home in China. He has gained more confidence in himself and is holding strong in his faith in God.

If Ren went to visit his family in China and Ren discussed his faith, Ren could be reported to the government. This is the main freedom Ren is limited on in China compared to the States where we have freedom of expression and freedom of speech.

God has changed Ren’s life. Ren felt alone at Texas Wesleyan during the pandemic. Ren found his Bible study group, worship music that calmed him and let that time with God comfort him. “God wants everyone to live a good life. God wants everyone to know about the good news in our life,” Ren said. Ren has had a journey through life with God he holds dear to his heart starting before moving to America.

Ren met Chris and Justine Jeter after he matched with them in a survey for a homestay family for international students. Ren wanted to stay to study English more and work on his writing during the summer.

Bailey O’Donnell, a sophomore Political Science and English major met Ren in the Summer of 2021 when Ren was staying with Chris and Justine Jeter. O’Donnell would go to the Jeter household to hang out and do Bible studies. O’Donnell said she would describe Ren as energetic and joyful.

“He’s always smiling and always makes other people smile, whether he meant to do it or not. “He’s a character and he’s super on fire for Jesus and I love that.” Ren comes to Bible study on Mondays and Thursdays with Connect College Ministry. O’Donnell co-leads Bible study on Mondays. He’s super active in Connect, and O’Donnell sees him every day since the fall semester started.
O’Donnell and Ren will often get lunch or dinner together. O’Donnell describes how Ren loves people. He embodies Connect as he truly wants to Connect with everybody. However, there is a language barrier. Ren worked hard and there has been a large improvement from summer to now.

Ren began attending chapel and when those in charge of Chapel were looking for those interested in speaking, Ren became excited. Ren’s favorite part of being at Wesleyan is Chapel every Thursday and making friends at various activities. He found God through Connect College Ministry and members of Southside Church of Christ after spending time with them and attending services, Bible studies and other various events. While Ren values academics, “he definitely values connections with people” and cares more about his peers and God being His number one above all else, said O’Donnell. Ren appreciates the differences in people. “Texas is a huge state, everybody is different,” Ren said.

Ren stayed in America to attend middle school but became homesick and went back to China. He stayed with his aunt and uncle while attending school in the United States. Intrigued by his experiences, he came back to the states for high school in North Carolina, where he graduated. He had also been attending Bible churches with his family.

Once graduated from high school, Ren wanted to go to a small school for one-on-one study focus with professors in college. He is a transfer student from the University of Lynchburg in Virginia to Texas Wesleyan University, a Methodist school, but the transition was difficult. He worked hard and had a few areas of interest.

He only transferred around 20 credit hours under an International Religions major. While this still interests him, Ren found a different calling. “Political science is a huge problem for everyone in this world… people know COVID 19 came from China, which is bad for Asian people. I want to study and speak for my people, not just Chinese people, but all Asian people.” “God said love each other, it doesn’t matter where you’re from.”

He has lived here for seven years but there are “many things to study and understand” making it more difficult. While Ren understands there are some people who may be racist to the Asian community, he has always felt welcomed at Texas Wesleyan.

Chris and Justine Jeter decided to house an international student because they want to be a blessing to college students and are always looking for more opportunities to do so. “When that opportunity presented itself, it was a no brainer,” said Chris Jeter, college minister.

Ren cares a lot about other people, which has its pros and cons. Ren would help with housework without being asked just because he likes to give. Ren is generous and enjoys giving gifts and having get-togethers. While bringing new stuff into the house was a nice gesture, it was too much and too kind, which is why he said it could be more of a con.

“Having someone come into your world from a very different background was enlightening and a very different learning experience,” Jeter said. Ren has “high energy and Ren is just excited to be around people. He wants to be friends with everybody.” One thing about Ren is “he is a Christian but has a unique perspective a lot of American students don’t have. He has friends home in China who can’t practice their faith. He has a different sense of valuing faith that others do not,” he said.

As an international student, food has also been a struggle here. “Many American people do not like the Chinese food: rice, noodle… also I speak loud.” Ren has been told to speak more softly because Americans do not like loud discussions. He experienced culture shock due to all of this and more. However, Connect College Ministry has helped him adapt to this change.

To Ren, the best thing about being an international student is the good weather, the professors and the students/classmates/friends. “It’s easier to talk to Americans” because they’re friendly. Of course, Ren’s experience at Wesleyan has been greatly positively impacted due to his growing faith and the freedom to express it here in America.

Ren enjoys the warmer weather. The winter storm in the Spring semester of 2021 was difficult as an international student. Ren had never experienced power and water outages with such cold weather. Luckily, Ren had some former Chinese friends who helped him during that time.