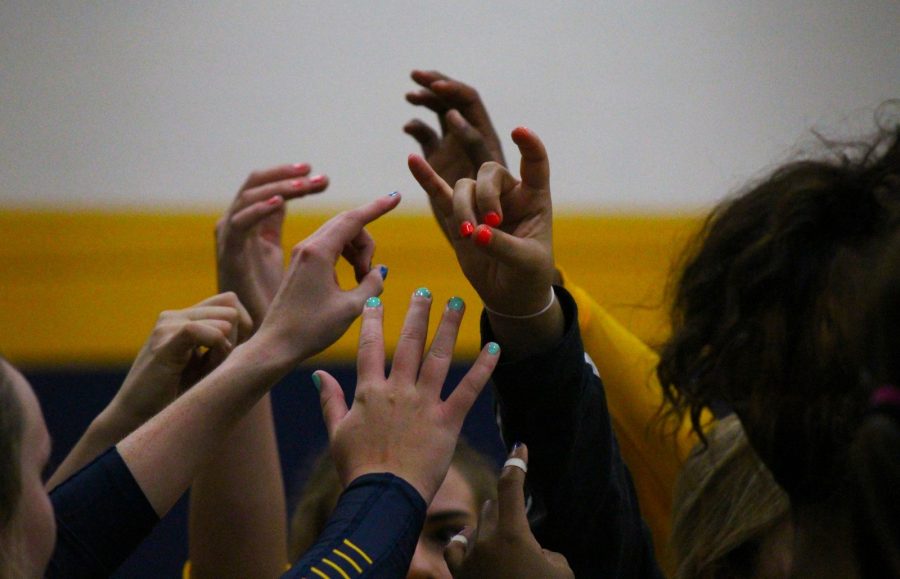 Although they lost, Texas Wesleyan's volleyball team fought hard throughout the game against Our Lady of the Lake University.

For Texas Wesleyan’s Lady Rams volleyball team, the 2015 season is all about the here and now.

“We are more focused on moving forward than looking back,” said head coach Kimberly Weaver.

The team started the season ranked third in the Sooner Athletic Conference, behind No. 1 Wayland Baptist and No. 2 Oklahoma City, according to rampsorts.net.

This, Weaver said, is the result of last year’s team and success.

The team is led by a solid group of seniors with a lot of experience, she said.

There have been a few changes in how the team plays; like Wesleyan, they believe in a smaller/smarter approach, she said.

“We have altered our serving philosophy a bit and place more of an emphasis on attacking seams in our opponents’ serve receive,” Weaver said.

The team graduated four starters after last year’s season and miss their presence, Weaver said, but they left their mark on the program and their impact made the current team better.

“We have filled their spots with resilient and hungry competitors,” she said.

Weaver said she recruited five new players in the offseason, including  Alanna Hayhurst from California and four Texans,  McKenzie Black from Forney; Carli Owens from Fort Worth; Jalyn Jones from Irving; and Morgan Reece from Denton.

Players are not the only new additions to the team, Weaver said. Lauren Hamaker has also joined the team as a student assistant.

“She brings a lot of expertise to our staff,” Weaver said.

“Our conference matches determine our postseason seed, so it is imperative we perform well during those matches,” Weaver said.

This year’s team has a unique resiliency, Weaver said

“We are focused fighters with big goals,” she said. “Those goals are not empty words but help guide our daily decisions and attitudes.”

Weaver said seniors Abby Zipoy and Shaughnessy Hearn impressed her because they came into the season with the same goals and attitudes.

“I think they will both have breakout seasons and help the team succeed,” Weaver said.

Seniors Kristina Gafford and Starnisha Bodie are other players Weaver has set high standards for; they say they have also set high goals for themselves.

Gafford said she wants to average forty assists per match, and along with the rest of the team win the conference championship.

“I am very excited for this season, we have great leadership and a lot of returners who will help this team,” Gafford said.

Bodie said her goal is to lead the team to the nationals in Iowa after they win the conference championship.

“I am very excited for this season!” Bodie said. “Just seeing how close we are on and off the court lets me know that we will be able to overcome any challenge that we may face against our opponents.”

Weaver said she expects a lot out of her players and coaches and wants them to excel at any part of their lives.

“It is my honor and my joy to coach these girls and work with our staff at such a great university,” she said.