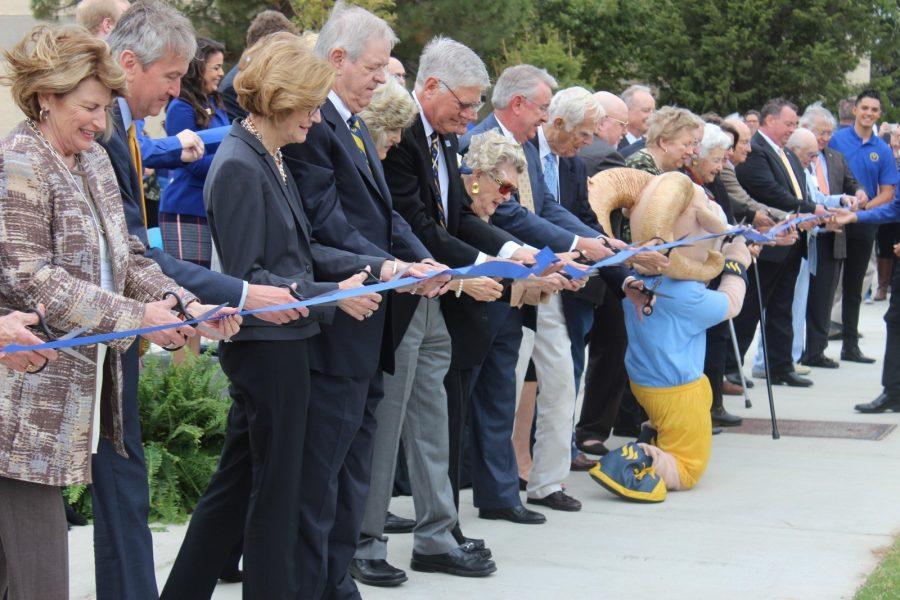 Photo by Valerie Spears Alumni, Board of Trustees and various others prepare to cut the ceremonial ribbon.

The clock tower, which is part of the 2020 Vision for Wesleyan, will further grow the university and help the community prosper, Slabach said.

“We are noticing how the Smaller. Smarter. approach has made an impact on east Fort Worth,” Slabach said during the ceremony, which drew alumni, local officials, members of the board of trustees, students and faculty to the mall.

Fort Worth Mayor Betsy Price also praised Wesleyan for how much the university has helped the community.

“Doesn’t this look fabulous?” Price asked about the tower as she introduced herself.

“Wesleyan is a jewel to Fort Worth,” she said. “From being the little college on a hill to being one of the strong points of the city just goes to show how much this community has grown.”

Price said she worked hand in hand with university officials to help in the process of getting the tower built and gave thanks to all parties involved.

Tarrant County Commissioner Roy Charles Brooks said he did not have any ties to Wesleyan but that “Wesleyan is my university.”

Brooks talked about the rebirth of the Polytechnic Heights area, and how the Rosedale Renaissance project has helped the community grow.

“Texas Wesleyan is the catalyst of this area, because it is educating tomorrow’s leaders,” Brooks said.

Beverly Volkman Powell, chairman of Wesleyan’s board of trustees, said the 2020 revitalization of Wesleyan is going to make the campus vibrant.

“I hope that the work we are doing here at Wesleyan can change the lives of our students forever,” she said.

“Today is all about the students, without them there would be no Wesleyan,” Tuggle said.

Slabach approached the microphone one more time to present the ribbon-cutting portion of the ceremony. After Willie the Ram zip lined into the ceremony, the ribbon was cut.

Associate Vice President of Marketing & Communications Darren White said he was very happy to see that a lot of people turned out to witness the fruition of a new era for Wesleyan.

“All responses I have heard have been positive, which is great,” White said.

Brian Franks, Wesleyan’s executive director of facilities development and operations, said he was happy to see this project completed.

“It was completed on time and looks exactly how we planned it out,” he said. “The tower was meant to be the doorway to the university and also to enhance the look of the buildings surrounding the mall area.”

Jacob Chesney, a freshman education major, thought the ceremony was well organized and was surprised so many people showed up.

“It’s pretty impressive that the campus pulled off something this large scale especially with how the weather is right now,” Chesney said.

Michael Baños, a sophomore music major, did not think that something this big would happen during his four years.

“It was cool to witness something this big, I never thought something part of the 2020 Vision would be done while I was here,” Baños said.

Adjunct math professor Clifford Vickery appreciated that Price and Brooks attended the ceremony; he was also happy to see the end of this construction on campus.

“I’m glad the tower is finished, and happy to see the infrastructure of the school improving,” Vickery said.