Need a job? Get the app 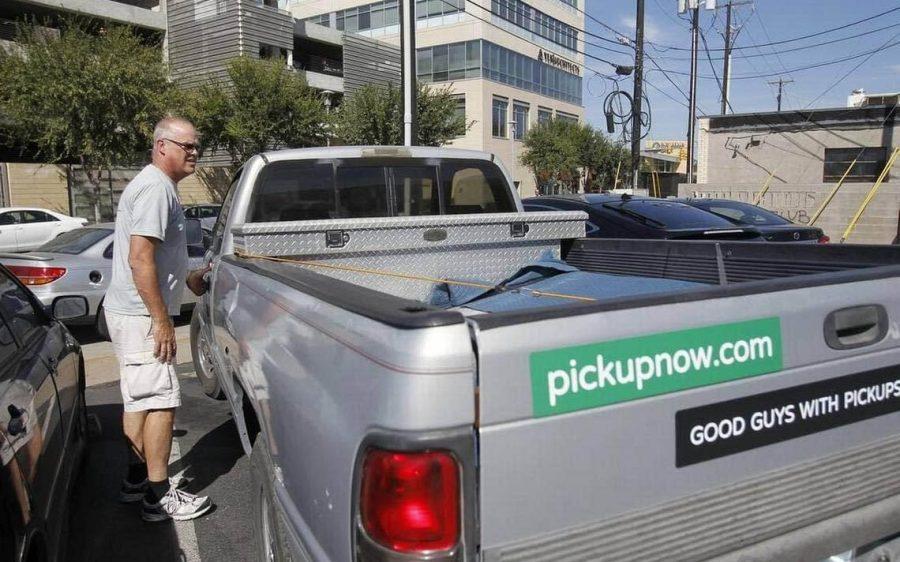 John Bartell is an Army veteran who works for an app-based company. (Photo by Dalise Devos)

Miles Straiton needed a part-time job with flexible hours, where he could work as needed and not have a set schedule.

Straiton, a Fort Worth resident, turned to Lyft, an app-based taxi service, to meet that need.

“I can work whenever I want and based on my availability,” Straiton said. “I can turn it on for an hour to make a little money and then turn it off and go to a movie. It’s convenient and easy and I don’t have to worry about dealing with a manager or any other normal work-related hassle.”

Straiton also works full time as a crew member at a Trader Joe’s in Fort Worth, but needed the extra income to help cover his car payment and student loan debt.

He loves the “easy money,” and he’s not the only one. More and more people are beginning to take advantage of the flexibility and benefits of app-based employment through services like Lyft.

According to a study released in May 2015 by Requests for Startups, a business newsletter, an estimated 40 percent of the American work force will be contractors or freelancers, rather than traditional full-time employees, by the year 2020.

And according to a separate survey released in October 2015 by Freelancers Union and the online work marketplace Upwork, the number of freelancers who earn 10 percent or more of their income through so-called “sharing economy” platforms like Lyft has almost doubled within the past year.

Uber, another app-based taxi service, is a perfect example. According to Forbes, Uber has grown its active driver base from practically zero in mid-2012 to more than 160,000 at the end of 2014, and the number of new Uber drivers has more than doubled every six months for the last two years.

The trend is dubbed the “1099 Economy,” so-named because freelancers typically provide a 1099 Form when filing their personal income taxes, rather than a W-2 form used by workers with traditional full-time jobs.

These tax benefits, along with the freedom of the job, are what attracted Nicholas Franda to app-based employment.

Franda, a former Texas Wesleyan student and Fort Worth resident, works about 30 hours a week as an Uber driver and enjoys the lack of direct management.

“With Uber, you are mostly your own boss, which is nice,” Franda said.

Even though Franda’s weekly income with Uber is slightly less than what he made previously working as a server in a restaurant, he would still recommend app-based employment to others.

“There is much more freedom in app-based employment,” Franda said. “You are treated more like a manager, because you manage your part of the job.”

Mark Berenbrok also enjoys the lack of management that driving for Uber has to offer, despite the fact that he also works more than 50 hours a week as a “mate” or manager for a Fort Worth Trader Joe’s.

“I like that you make your own schedule, don’t work when you don’t want to, and don’t have anyone looking over your shoulder,” Berenbrok said.

Berenbrok was attracted to app-based employment out of sheer boredom and only drives for Uber about 10-20 hours per week.

“I recommend app-based employment for people who have a hard time with schedules,” Berenbrok said. “But in order to make it worth your time, you need to be able to hustle.”

John Bartell, an Army veteran from Aledo, is certainly no stranger to “hustling” and works more than 40 hours a week for app-based employment alone.

Bartell was first drawn to app-based employment in August 2015 when he discovered PICKUP through a veteran organization’s Facebook page. PICKUP, an app-based service that connects customers with drivers of pickup trucks to aid in tasks like moving, targets drivers who are military veterans because of their work ethic and clean background.

“I recognized right away the potential for PICKUP to become very profitable and rewarding,” Bartell said, “but it started in Dallas, so I was forced to go out and draw business from the Fort Worth area. I saw that if I could hang in there, I could be seen as someone the starters of the company could count on to help it grow.”

Bartell then sought employment through both Lyft and Uber to help him make money so he can “hang in there” while he continues to help grow PICKUP. Unfortunately, the money is not regular, Bartell said.

“It’s hard to depend on how much you’re going to make,” Bartell said. “Since Uber and Lyft are in competition to keep their prices low, income is low for drivers. Uber and Lyft are also both constantly recruiting, which is starting to saturate the market with drivers, making it harder to make money.”