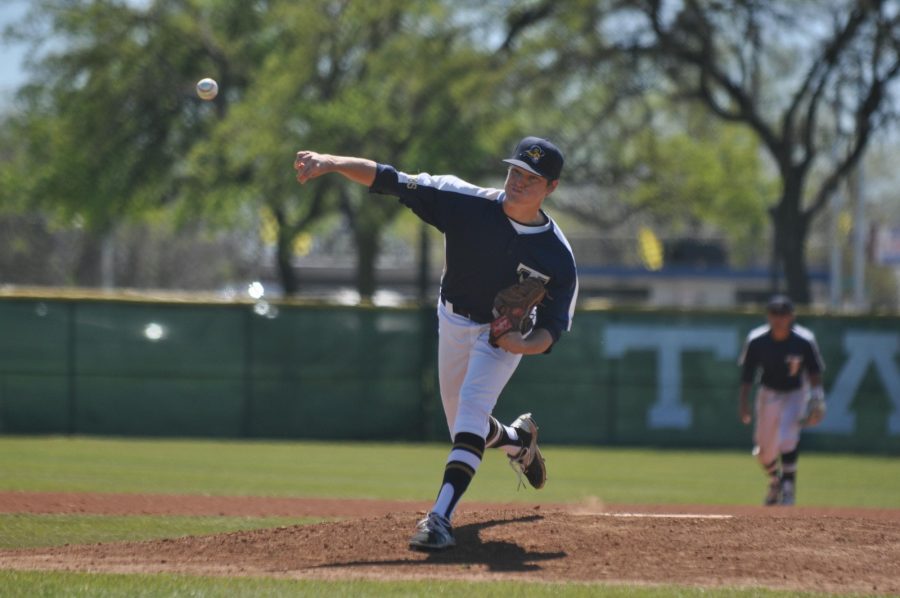 Sophomore pitcher Stephen Yancey throws the ball toward home plate during the game against USAO.

The Texas Wesleyan University Rams baseball team have been hit hard with injuries in the young season, but they remain determined to compete, head coach Mike Jeffcoat said.

Jeffcoat said that major and minor injuries have hindered the team, and along the way many players have gained bumps and bruises that disrupt their play.

“Three of our top pitchers, including sophomore Stephen Yancey, are out with sore muscles and several other players are playing at about 70 percent,” Jeffcoat said.

Jeffcoat said that even with the injuries, Wesleyan managed to attain a 15-13 record and a 5-4 record in conference as of March 20th.

“Right now our first major goal is to make it to the conference tournament,” Jeffcoat said. “Once we get the team healthy I can see us making a run for the conference title.”

Without the contributions of a few exceptional players this season, who knows where we would be due to the injuries, Jeffcoat said.

“Casey Moses has played really well at shortstop, [catcher] Garrett Crook has been solid behind the plate, and [outfielder] Blake Seaton has stepped up at the plate to provide runs,” he said.

This season Moses leads the team in hitting with a .376 batting average and homeruns with two and Crook has a .987 fielding percentage behind the plate according to ramsports.net.

“Science and Arts are one of the top teams in the conference and to play so well against them shows the determination of the team,” Jeffcoat said.

Assistant head coach Robert Garza also praised a few of the leaders on the team including Moses and Crook.

“Along with those two, outfielder Ryan Adam has done a good job of stepping up and being a vocal leader, which the team needs right now due to the injuries,” Garza said.

Garza also said that the team never wants to settle, which is important because of the injury situation; staying away from the injury bug will help the team tremendously going forward.

“Everyone wants to win and it is because of that I believe this team can do special things,” Garza said.

Junior biology major and catcher Garrett Crook has noticed a few of the Wesleyan pitchers have stepped up on the mound to help the Rams win a few games. Crook has played in 24 of the 28 games this season and started in 21 of them.

“Stephen Yancey and Zach Aitken have shown a lot of upside in the early part of the season,” Crook said. “Yancey is recovering from a sore muscle but once we get him back the pitching staff will almost be fully healthy.”

Crook also said that his job as a catcher is to facilitate the pitchers on the mound and know what they want to do once they are pitching.