Two new bills and a tabled bill from last week were passed on Tuesday at the Student Government Association meeting.

The Test Prep Books Bill, which was tabled during last week’s meeting, was passed after SGA members decided to keep the vocabulary cards as part of the bill. The bill allocates $423.56 to provide test prep books inside of the Eunice and James L. West Library.

SGA Head Representative Kierra Glover said she prefers a textbook because you get more information out of the textbooks in addition to the actual vocabulary cards.

The other two bills that were passed help fund events happening on campus next week.

SGA also passed the Latin Night Bill, which allocates $267 for food and refreshments during the Latin Night, which will be hosted by the Black Student Union from 7 p.m. to 9 p.m. on Sept. 16 in the Stella Lobby and Stella Fire Pit, said BSA President Blen Hussain.

Hussain, a senior political science major, said she wants to focus on promoting cultural diversity on campus through this event.

“My personal goal is to promote diversity on campus that’s not taught in a history class, it’s not inside a political science course,” Hussain said. “I just want people to come, have a good time, and do something different.”

SGA President Alyssa Hutchinson said that the event is to help promote Constitution Day without students getting disinterested.

“We wanted a way to engage students and inform them and so we thought Constitution Day would be a great way to collaborate on that,” Hutchinson said. “Now we have a reason for students, faculty, and staff to get together in a non-classroom setting and just get to know each other.”

SGA meetings are held 4:30 p.m. Tuesdays in the SGA boardroom on the second floor of the Nick and Lou Martin University Center. 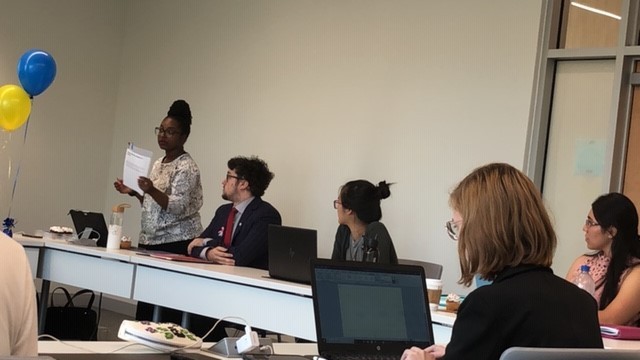 Head Representative Kierra Glover explains the use of the textbooks that include vocabulary words at Tuesday’s meeting.
Photo by Arely Chavez