Students react to rat in Dora’s 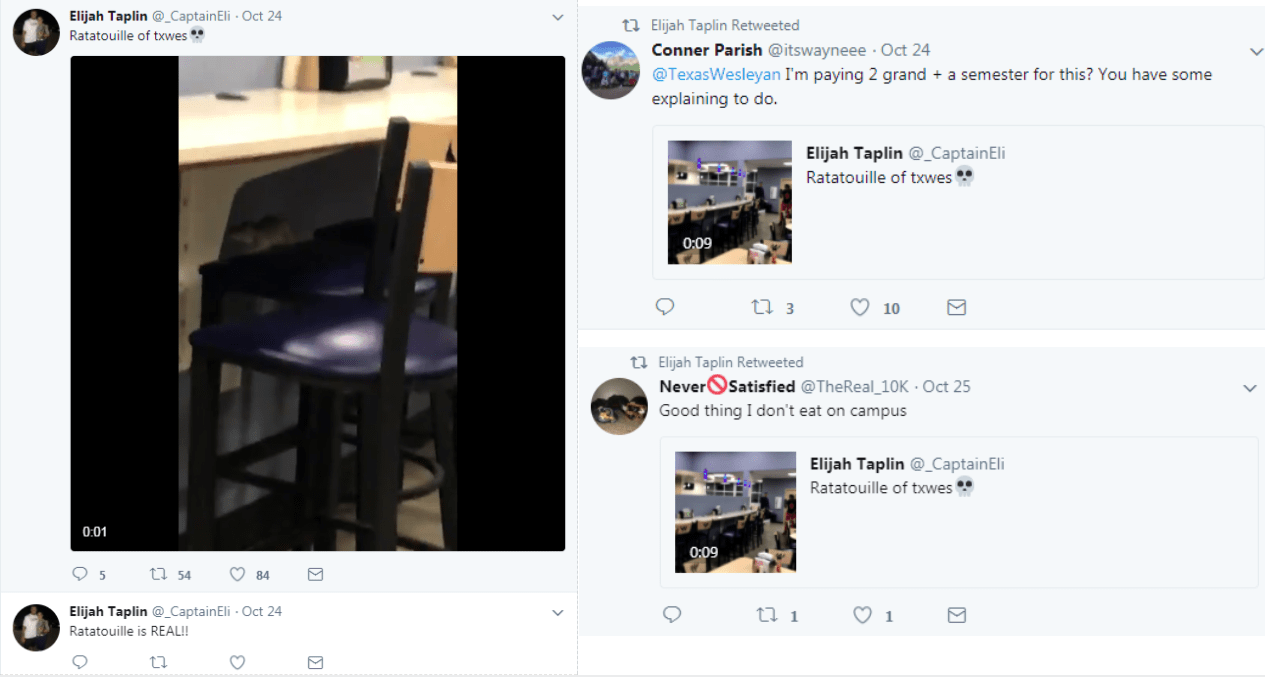 Freshman Elijah Taplin thought he heard silverware drop during dinner, until the Dora Roberts Dining Hall erupted in screams of, “There a rat!”

“I videoed it because I didn’t think my friends would believe me,” Taplin said. “One of my friends was like, ‘I bet you won’t post that to Twitter.’ We made a deal and I posted it on Twitter.”

Taplin, a biology major, was catching a late dinner Oct. 24, when a rat fell through the ceiling. The video he posted to Twitter, “Ratatouille of txwes” caused some students to be concerned about whether it was safe to be eating at Dora’s. As of late last week, the video has been retweeted more than 50 times from the original source, and even more from retweets.

“I don’t know [if it’s safe to be eating there],” Taplin said. “I haven’t eaten there since. I’ve been going to the WEE. I don’t really want to eat back there. I mean, there’s going to be bugs wherever, but a whole rat is kind of nasty and disturbing.”

Sophomore chemistry major Jose Tiejo also was concerned about a rat being found in Dora’s and stopped eating there for a bit.

“Honestly, I was kind of disgusted [by the rat], which is why I didn’t come to Dora’s for like that whole week,” Tiejo said. “I just did not want to be anywhere around that. At the same time, I could understand, because it was going to happen at some point. I just don’t want to take the risk of getting sick from that.”

“For me personally I’ve heard [noises in the ceiling] them since late September,” Six said. “I’ve heard from a former staff member that it’s been happening since last year.”

When Six saw the video on Twitter, she was upset and ready to act.

“I wasn’t here that day, but I saw videos all over Twitter and everything,” she said. “I was so upset about it all. The next day when I realized they were still open that upset me more. How do we know that we sanitized and all that stuff?

“That really upset me, so I called the dean right after that happened the next day. I was like, ‘This is not okay’ and he didn’t get back to me, but he put me in contact with Sarah [McMahon, assistant dean of students for residence life]. I sent her a long email saying, ‘The rat isn’t the only problem. It’s other problems that have led up to this and I don’t see why ya’ll haven’t seen all these problems.’ I feel very strongly about it [the rat].”

Six and Tiejo both said they’re only eating at Dora’s right now because they’ve paid for a meal plan.
A meal plan is $1,992 per semester, plus tax, per semester, and is required of all students living in the residence halls, according to txwes.edu.

“It’s very annoying that [the meal plan] is so expensive and that it’s required,” Six said. “I can’t even choose to eat here. I have to eat here, so they should at least keep it sanitary and healthy for us to eat at.”

While Six would like to see a public apology from dining services, Tiejo would like it to go beyond that.

“I feel like there should be some sort of alteration because this issue happened,” Tiejo said. “They should give some kind of discount or lower the price, because there was the chance of illness.”

Karen Cutler, Aramark’s vice president of communications & public affairs, wrote in an email Monday that the rat appearance at Dora’s is an “isolated situation.” Aramark, she wrote, takes food safety “very seriously” and the company works closely with Wesleyan, the pest control company and the Health Department “to ensure that the food served at Texas Wesleyan is of the highest quality and prepared within the safest environment.”

Aramark’s director of dining services, Michael Clifton, referred all comments about the rats in Dora’s to Ann Davis, Wesleyan’s director of communications.

Davis said Thursday that the rat issue has been dealt with and it is safe to eat at Dora’s.

“Yes absolutely [students are safe to be eating at Dora’s],” said Davis, who posted a statement about the rat incident and how it has been dealt with at txwes.edu/update. “It was the day after [the rat] that they completely disinfected and cleaned everything from where the rodent had come down from the night before. Everything was even double-checked after that.”

Davis said that the school is contracted with Massey, a pest control company, that comes out once a month and that Dora’s has regularly reported health inspections by the health department. She also said Dora’s engages with an independent auditor that does health and safety checks a few times a year as well as their own self-audits.

“We have [been having health checks] like clockwork,” Davis said. “Everyone here takes that very seriously. We’re serving food for our students. I know that Aramark takes a lot of pride in the food that they serve.”

Davis said the reason for the rat being found in Dora’s was the weather changes.

“We’re obviously so sorry that happened,” Davis said. “What happened, which I learned from talking with Michael [Clifton], the director of dining services at Dora’s, facilities, and everything, is that — I know this for a fact because I used to work PR with a home pest control service – October is the number one time of year where rodents and little critters are trying to get in. It’s because it was cold that week. We had a huge, first cold snap, so that was the first time this year that they’re running inside to find warm places.”

Taplin and Six are concerned that there will be more rats in the future.

“I do feel like there is [more than one rat around],” Taplin said. “I talked to some people in the administration office because they said they’ve seen the video too. They’ve said that there’s been complaints [about rat infestations] down the street like a few blocks over. I feel like they’ll [Dora’s] get a lot more [rats], especially with the weather changing.”

Health or safety issues should be reported to facilities at (817) 531-4454 or emailed to Jimmy Gresham, director of facilities operations, at jgresham@txwes.edu. 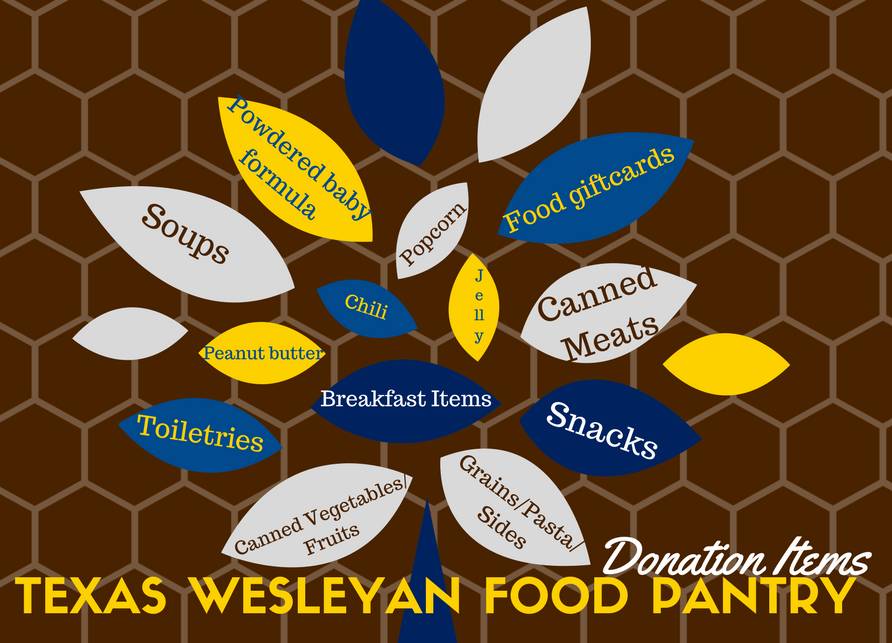 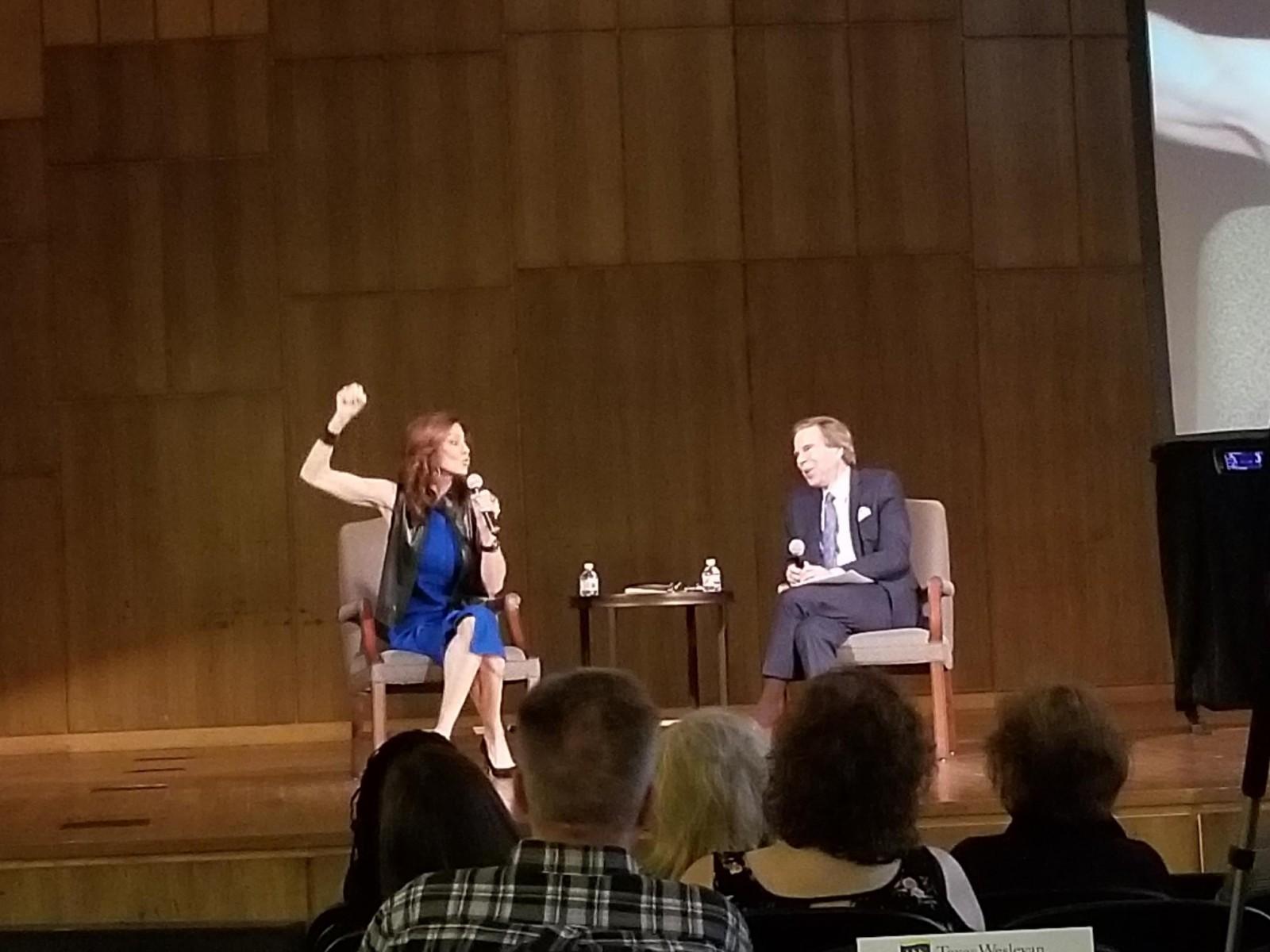