TAG (Thanking All Givers) Day started in 2014 to show appreciation to all donors to the university.

The tags are put on buildings, rooms, or anything else that is here at the university due to donations, and it’s always a good turnout, she said.

Students can take a picture of one of these tags to get one of the limited-supply T-shirts.

“Participation has been pretty consistent,” Wood said. “We normally have shirts for the first 100 students and those go pretty fast.”

“It was kind of cool seeing how much the alumni donated,” Rodriguez said. “It helps out a lot.”

Rodriguez also joined in during the event and was one of the students that was able to get a shirt.

He said he enjoyed it and would “definitely” like to help thank our donors again next year.

Surprisingly, one of the donors wasn’t too far from Rodriguez. 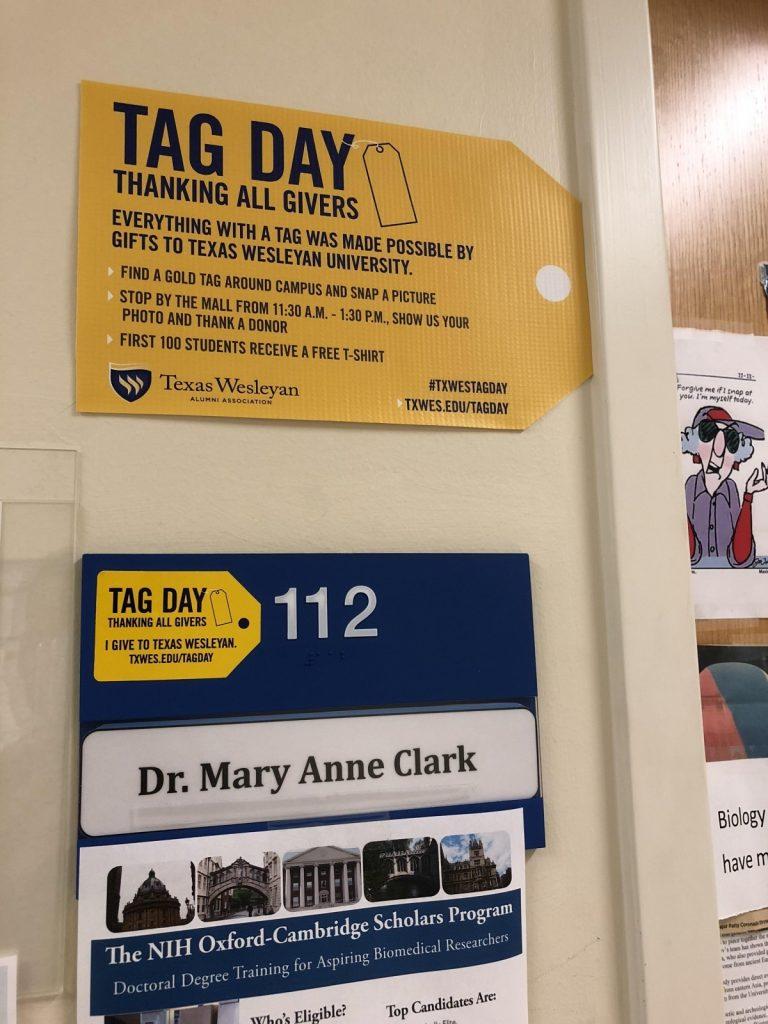 Professor of Biology Dr. Mary Anne Clark, professor of biology, is a proud donor to Wesleyan and shows it on her office door. Photo by Akeel Johnson

She started as an adjunct professor, signed on full time in 1979, and has loved Wesleyan ever since.

“I liked being able to talk to the friendly people inside and outside of my department,” Clark said. “I think it’s worth supporting and I want it to continue.”

Alumni relations has no plans of slowing down on hosting TAG Day.

“We get to do the fun part,” Wood said. “We have a long way to go, and we hope to continue to build on the event.”

The Office of Alumni put up signs during the event explaining the yellow tags put up around the university. Photo by Akeel Johnson

Jeffcoat pitches his opinion on his termination