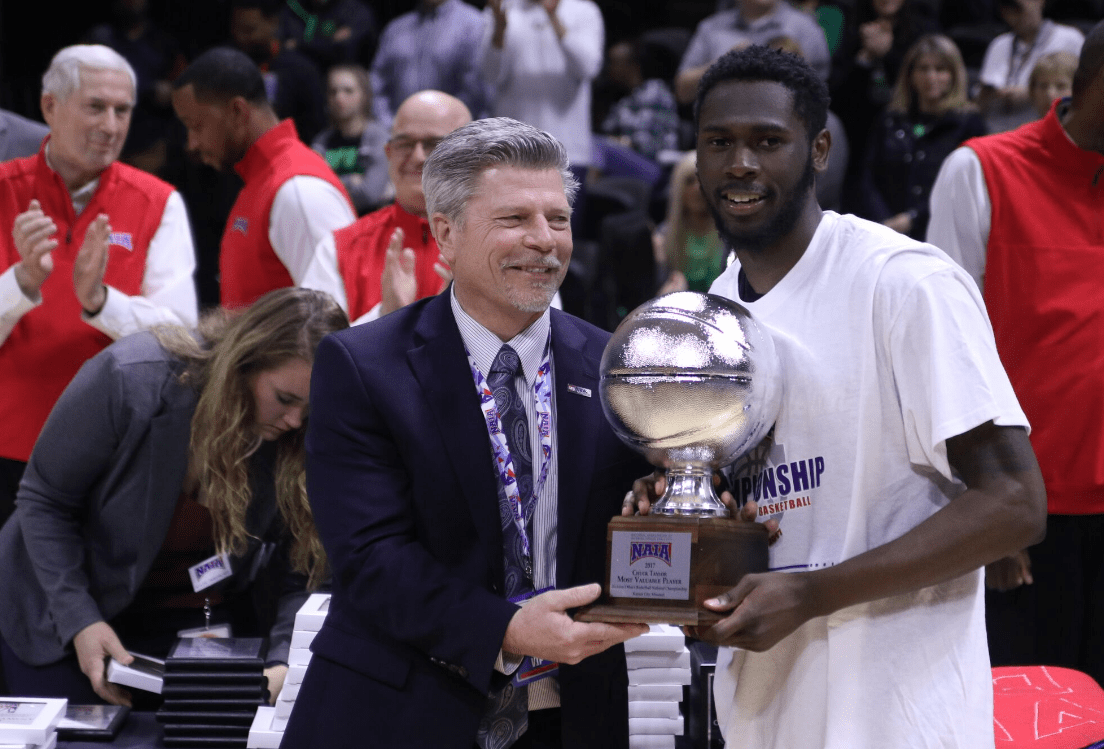 The Rams dominated from the beginning and led the entire game, with MVP Dion Rogers scoring a game-high 28 points. The game in Kansas City was seen by a busload of Wesleyan students who drove up from Fort Worth.

A reception party for the team will be held at 6 p.m. Wednesday at the Sid Richardson Center, according to an email from Vice President of Student Affairs/Dean of Students Dennis Hall. There will be free food; students who would like to make signs/banners can stop by the Student Affairs suite in the Brown-Lupton.

This is Wesleyan’s men’s basketball team’s 15th appearance in the tournament; the Rams are now 18-13 all-time in the national tournament, according to naia.org. The Rams’ previous NAIA title came in 2006 under head coach Terry Waldrop, according to ramsports.net.

Head coach Brennen Shingleton said he’s happy about the victory and that the Rams earned their title fair and square.

“I’m just ecstatic,” Shingleton said early Wednesday morning. “I’m really excited for the team. They worked hard, they committed to the process, they did what they’re supposed to do, and they got the reward they deserve.”

Wesleyan University President Frederick Slabach wrote Wednesday that he was very proud of the team and the coaches.

“They have shown true grit, resolve and tenacity throughout the season,” Slabach wrote in an email. “This is a major accomplishment that Texas Wesleyan University will celebrate for years to come. We have a tradition of athletics excellence at Texas Wesleyan, and these student athletes are a huge source of pride for the entire community.”

Shingleton said each year has its own strengths, but every one of them is good.

“Completely different,” he said. “Every year is different, there’s a new group of guys, a different culture, a new chemistry. Every one of them ranks high.”

But when asked if this year was his favorite he said, “No – they’re all very good.”

Rogers said he was left speechless after the victory.

“It’s unexplainable man, I don’t know how to feel right now,” Rogers said. “It’s just amazing. So much that we’ve been through, all the ups and downs. So we just pull through as a team, we stuck together – we pull through as a family and we played for each other.”

Senior guard Naiel Smith, who collected 17 points, six assists, four rebounds, and got the play of the game for a smooth layup he pulled off in the second half, described the Ram’s triumph as a blessing.

“It feel good man, and actually, to be honest with you, it don’t even feel real,” Smith said. “My coach say he believes in me – he believes in us, and we here man, and we got it, it’s a blessing man. [Especially] to be the person form where I came from.”

Smith said every Ram present that night deserved praise for the team’s securing of the champion title.

Jeffery, who gave the Rams four points, three turnovers and three rebounds, and had an incredible layup in the second half, wrote in a text that Monday night’s big accomplishment seems surreal to him.

“It hasn’t sunk in yet that we actually won,” he wrote. “But overall I mean I feel good. I feel accomplished I would say.”

Jeffery wrote the Rams generally had an excellent season.

A bus full of Rams fans left the Wesleyan campus around 11:30 a.m. Monday to head for the Municipal Auditorium in Kansas City, where the tournament was being held. The bus eventually got back at around 10 a.m. Wednesday.

Sophomore computer science major Cameron Bennett wrote in a text that the bus trip to the game was fun.

“It was pretty fun, we were joking around, watching movies, and mentally preparing for the game!” he wrote.

Bennett wrote that the overall mood was somewhat dramatic in Kansas City for Wesleyan fans.

“It was crazy!” he wrote. “The entire atmosphere seemed to have shifted compared to when we play at home. Things were serious, yet passionate at the same time for both the players and the students, staff, and teachers that came!”

Bennett feels like the result of Tuesday’s game was an accomplishment for Wesleyan as a whole.

“Like, not only the player had accomplished a major feat, but Texas Wesleyan as a whole had completed one,” he wrote. “We helped support them in their need and they pulled through with all of their might. And if anyone deserves to be recognized or admired on campus, it’s definitely the basketball players and coaches!”

Mark James, a freshman education major who is also a linebacker on the football team, described the game as being “lit.”

“The game was lit, the boys went down there and took control of the game,” James said. “They kept the lead for the most part. They made us proud, and we had a good fan base down there.”

James didn’t describe the trip with the same amount of positivity as Bennett, but said that when the fans were finally inside the arena to cheer on the team, everything was great.

“The trip to the game was a little bit shaky, but when we pulled up, we go to turn up, so everything was alright,” he said. “Everybody was happy, fans was like steady supporting them. I think the players really like that though, after the game, they thanked us for coming. At least we know that our fan base is making a difference in our sports activities.”

James said the men’s basketball team securing the title made a precedent for the other sports teams.

“I felt relief,” James said. “I felt like it set the standards for the school, academically and athletically. Football season going, that just gave me a good bounce like, ‘Man, we got to go out there and get it too.’”

A tire caught fire in Oklahoma as fans were coming back to Fort Worth.

“The trip back was a memory that will never be lost,” James said. “We was coming back, and we was like three hours away, I never went to sleep, I stayed up the whole time. I started feeling like gas, like smoky-oily stuff – noxious or whatever, so I didn’t go to sleep. About an hour later, the tire popped so we pulled into a gas station. When we pulled up, after a while, it caught on fire. When it caught on fire, I helped rush everybody out, make sure everybody safe.”

Bennett said though the trip back took a turn for the worse, everyone was fine.

“The bus’s tire caught on fire while we were at a gas station and everyone ran out of the buses to escape the chaotic moment,” Bennett wrote.  “It started off really well, then things went downhill really fast. Potentially endangered people’s wellbeing, but luckily, everyone was on their toes and got away from the fire in time.”

The fire was eventually put out by fire fighters.

“Love is like a fatal accident, something good happens, then something bad,” James said. “But at least we came back with a title, so I’m not too bad about the trip.”

“I’m so proud of this team and the coaches. They have shown true grit, resolve and tenacity throughout the season. This is a major accomplishment that Texas Wesleyan University will celebrate for years to come. We have a tradition of athletics excellence at Texas Wesleyan, and these student athletes are a huge source of pride for the entire community.”

The Rams standing together after a swift victory against Life University’s Statesmen.
Photo by Josh Lacy

Najeal Smith in the NAIA tournament game on March 21.
Photo by Josh Lacy

The team holding their banner after the game at Kansas City, MO in the Municipal Auditorium.
Photo by Josh Lacy 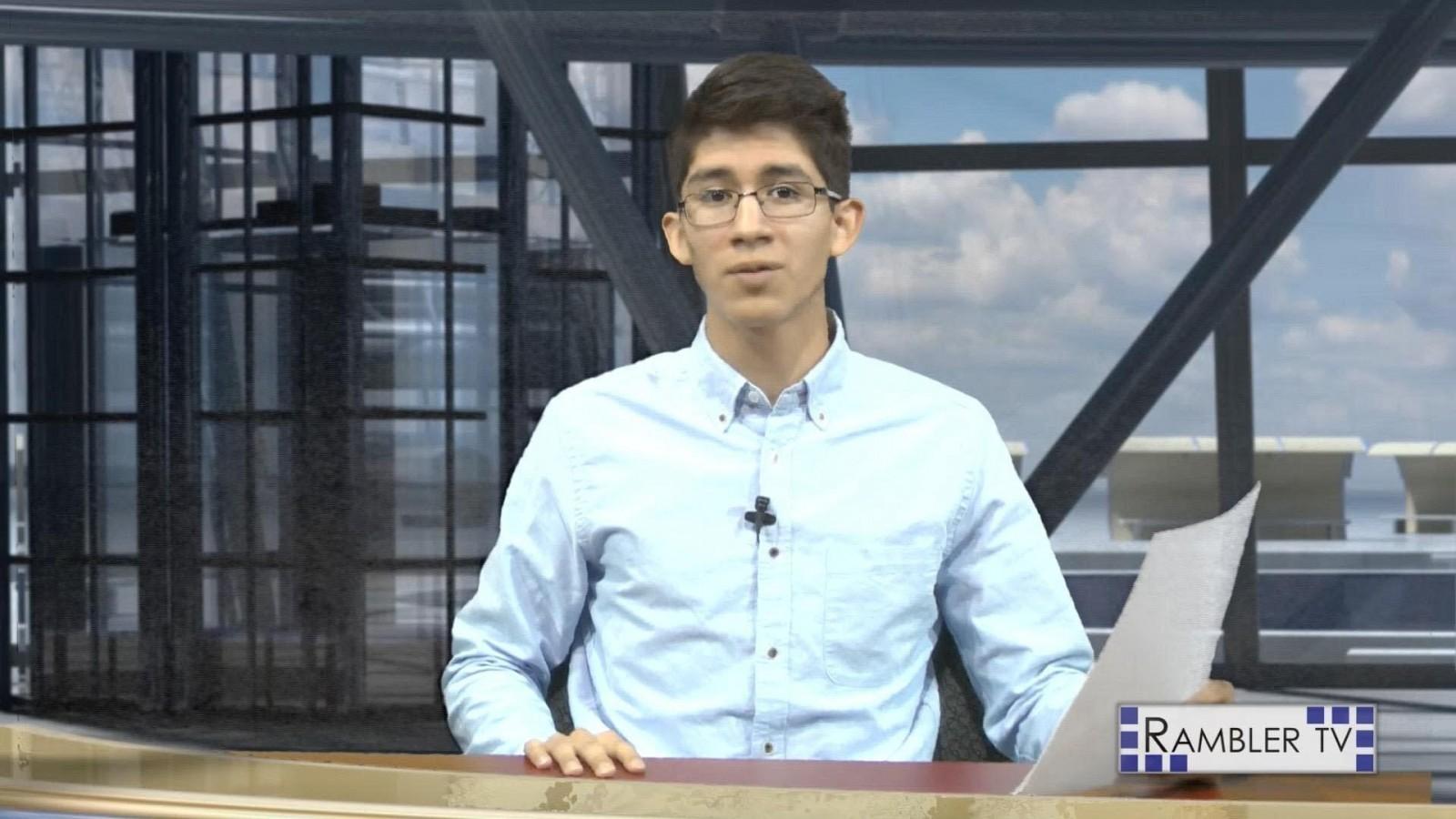